Best Guns To Buy In Phantom Forces: Our Top 10 Ranked

Phantom Forces is an epic shooting title in Roblox. Here's a quick look at the top 10 best guns you should buy in Phantom Forces.

Roblox boasts a roster of incredible FPS shooters, and Phantom Forces practically takes the cake. It’s heavily inspired by Battlefield 4 and a few of the developer’s older projects. It’s been active for over 5 years now, with over one billion user visits, and continues to receive updates every now and then.

Getting into Phantom Forces, players can prebuy a rich collection of guns, but not every gun is worth the price tag. So, if you’re looking for the best guns in the game right off the bat, this guide is just for you.

Now, here’s a quick look at the best guns in Phantom Forces:

The MP5-10 is by far one of the best iterations of the MP5 available in Phantom Forces to date. While the MP5 is a decent gun in itself, the MP5-10 basically outranks the MP5 in every stat and aspect. The fast-paced action-packed gameplay of the MP5-10 makes it ideal for users looking for a suitable run-and-gun loadout. You can quickly bolt into a room and take out enemies with decent hip-fire accuracy.

To be fair, it kind of falls short on the recoil aspect, but overall, the MP510 provides users with a solid fast-paced Phantom Forces experience when navigating tight corners, spaces, and buildings.

The RAMA is another great gun in the SMG category. It offers users a high range of mobility and decent damage across the board. The gun has been bumped from 24 to 25 damage per round which is a significant bump considering it can take out enemy players in four rounds. Taking into account the fact that it has a magazine capacity of 80 rounds and a dump speed of a thousand rounds per minute. The RAMA is pretty much another go-to gun for the run-and-gun enthusiast. It’s a significant upgrade over the P90. Although it does suffer from a bit of recoil, you can mitigate it by pointing down while firing.

At number three is the M107 Sniper Rifle. It’s pretty underrated if you ask us. Although it’s not loved by the community, it can be a formidable weapon in the right set of hands. The M107 is ideal for dominating the longer sightlines in long-range maps but falls pretty short when trying to quick-scope enemies. And what’s particularly annoying is that it can’t seem to take out enemies in one shot to the chest either, which is pretty standard for a Sniper Rifle.

You’d be surprised to find the C7a2 so high on the list, and the reason is that it’s about to be nerfed pretty soon. The C7a2 appears to be your average SMG on the surface but it’s a hell of a lot more than that. It can take out enemies in three to six shots with an average dump speed of 800 rounds per minute. But the core reason the C7a2 stands out is its high damage over the longer to medium-range sightlines, allowing players to even headshot enemies at these distances. 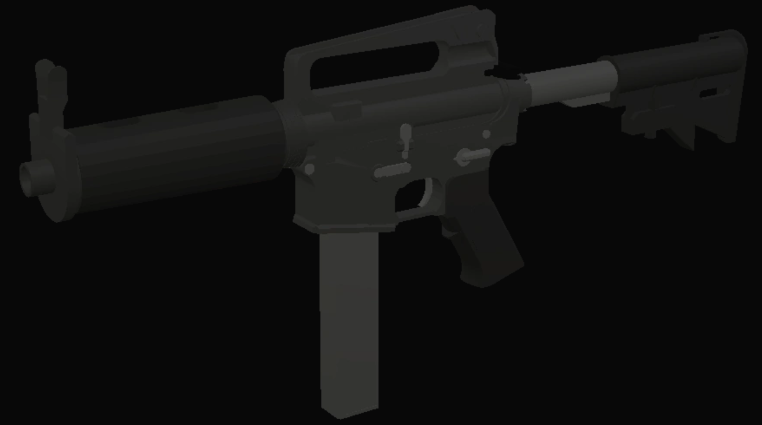 The Colt SMG 633 is by far the best gun for close-quarters combat. When the stakes are high, and you need a reliable gun that outputs loads of damage, the Colt SMG 633 pretty much takes the cake. Although it’s ranked pretty poorly at rank 49, it basically wipes with competition, particularly when compared to the RAMA. It can kill enemies in three shots and features a base bullet dump speed of one thousand rounds per minute.

The only downside is its recoil which is not that bad, to be honest. One more thing to note is its smaller magazine capacity of 32 rounds compared to the RAMA, which can hold 80 rounds. But you won’t be considering equipping the RAMA once the Colt SMG 633 is in your hands.

If you’re not a fan of SMGs and don’t have decent mouse accuracy, and are big on close-quarters-firefights bursting in and out of rooms, you could pretty much opt for the DT-11. The DT-11’s sawed-off variant is a pretty fun gun to have on hand. You can literally one-shot enemies as you consecutively wipe the floor with them through each room you traverse. And the best part is that it absolutely trumps the Steven and the Saiga in terms of reload speed, which is pretty important when considering a shotgun.

Although it’s not one of the best guns in the game and is looking at a rework sometime in the future, it’s still a pretty fun gun to use.

The Beowulf TCR is one of the best semi-automatic assault rifles in the game. It’s a pretty powerful gun with loads of damage and stopping power at its disposal. But you have to wait a bit between consecutive shots due to its semi-automatic nature. At long to medium-range distances and sightlines, the Beowulf TCR can basically pick off enemies with 2 shots to the limbs, two shots to the chest, or just one to the head. It does a total of 91 damage to the torso point blank and over 50 at a decent range.

And you can easily pick off enemies without ADS at really close ranges. So, the Beowulf TCR can pretty much perform in any scenario you throw at it, provided you’re patient with semi-automatic guns.

The Steyr Scout is the most overpowered Sniper Rifle in Phantom Forces. Not only does it offer users high levels of mobility, but it also doesn’t have the usual cut-down damage akin to the M107. Paired with its high 100 rpm mag-dump, it’s ideal for fast-paced quick-scoping and jumping back and forth between long corners, corridors, and sight lines. One drawback is the awful body damage, so if you’re good at consistently getting headshots, this gun will be perfect for you. Probably, one of the best Personal Defense Weapons for close-quarters-combat would currently be the Kriss Vector, thanks to its amazing TTK. It’s a neat little replacement for the ppsh Obras after it was nerfed to the ground. The Kriss Vector is up there with its incredible reload time, minimal recoil, and quick mag dump speed.

The G11 K2 is our top pick for the best weapons in Phantom Forces. Although it’s pretty expensive, it’s definitely worth the steep price tag. It features a burst mechanism that ensures all bullets land in the same spot. It’s basically a burst-hitscan weapon allowing users to burst three-shot headshot enemies ensuring a one-tap kill.

Considering the burst is dead-accurate, you can one burst any enemy regardless of where it hits at any range. You can practically maneuver with it at any range. It has a small learning curve of its own but after a couple of rounds, you’ll get used to it!

And that’s a wrap for the current roster of best weapons in Phantom Forces. Make use of your default loadouts, find a setup and niche that’s good for you and proceed to prebuy guns. Whether you’re a CQB enthusiast or a Sniper, there’s room for everyone in Phantom Forces. But mind you, there’s a lot more to Phantom Forces than just guns.

Till then, see you later!

No man is an island, no man plays alone. That adage is not necessarily true,…