Electronic Arts is one of the biggest publicly traded video game companies in the world, This guide will show you where & how to buy EA Stock

Electronic Arts Inc. (ticker symbol $EA: Nasdaq) is an iconic American video game developer and publisher with headquarters in Redwood City, California. Trip Hawkins, a former Apple employee, founded the company in 1982 after leaving the firm to pursue what he saw as the future of computing technology – video games.

Electronic Arts was an early pioneer of home PC gaming, promoting game programmers and designers as its ‘software artists.’ The early years of EA saw the company publish several games and productivity software for PCs. However, the company would get its breakthrough with the 1987 video game title, ‘Skate or Die!’ which was a massive hit with the video gaming market.

After experiencing success, Trip Hawkins would shift the company focus to in-house game development and publishing in its studios. To achieve the infrastructure it needed to do everything in-house, EA went on a series of acquisitions, starting with Distinctive Software in 1991, rebranding it to EA Canada.

Electronic Arts EA owns and operates several major game production studios. EA Vancouver in Burnaby, Tiburon in Orlando, EA Romania in Bucharest, BioWare in Edmonton and Austin, DICE in Stockholm and Los Angeles, and Respawn Entertainment based in Vancouver and Los Angeles all fall under the EA umbrella.

Let’s unpack everything you need to know about this influential gaming company.

eToro: Easy to Use Broker for Buying Stocks

eToro is a great easy to use exchange to buy this stock. The platform is a social trading broker that allows investors to buy, sell and convert over 80 cryptocurrencies, stocks and commodities.

This exchange features a simplified user experience that makes it easy for investors with zero knowledge of investing to easily buy their favorite stocks.

With a minimum deposit of $10, depending on region, investors can easily buy and sell digital assets. One major feature that makes investing enthusiasts trust eToro is its seamless array of deposit channels, including bank transfers, debit/credit cards, and e-wallet solutions like PayPal. 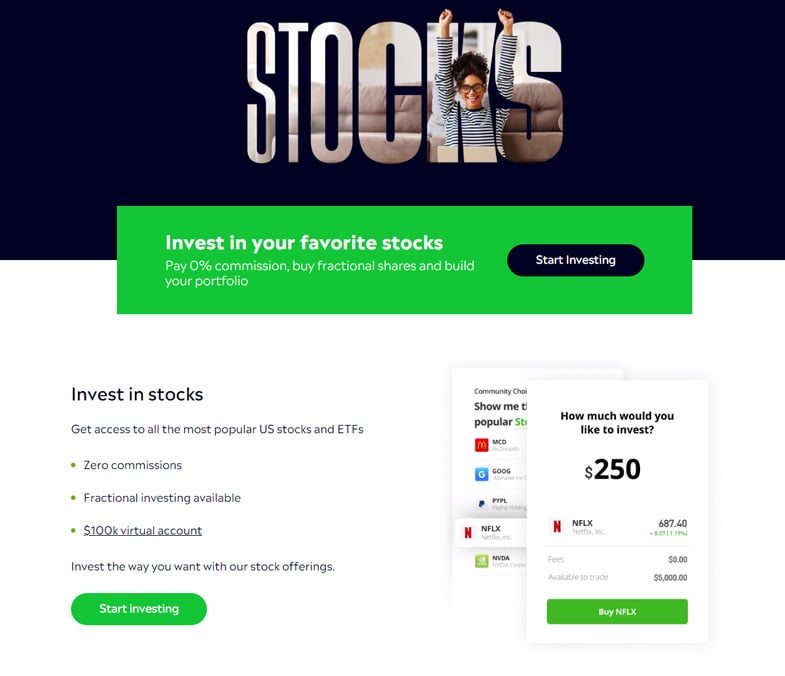 eToro allows fee-free deposits on all payment channels and zero charges for account opening or management.

One of the most impressive features is the CopyTrader option. This feature enables investors to learn how to buy different stocks and shares by finding experienced traders on the platform and copying their successful trade strategies to profit whenever they do.

For security, before signing up, eToro requires traders to enable two-factor authentication (2FA) for added protection to their accounts. eToro also features advanced encryption and masking technologies to secure all users' accounts.

Founded in 1982 by three former Apple employees, Electronic Arts grew to become one of the world’s largest video game publishers and developers, especially in the sports game space. Trip Hawkins was a marketing director at Apple, becoming the head of EA at 26 years old.

Co-founder Bing Gordon became the company’s marketing director, and Tom Mott was the company’s third co-founder. Gordon and Hawkins earned their MBAs from Stanford University, deciding to form EA as a specialist company in developing, publishing, and marketing video games for home PCs.

The duo came up with the idea during a dinner with four friends at Trips home in California. The founders raised $5 million, opening the company with a roster of 11 employees. The company grew fast, using the strategy of basing its business on a flexible model of offering titles for all popular hardware systems during the 1980s. It would produce several versions of games to meet the compatibility needs of the market.

The company shipped its first video game title in 1983. It was a software game developed for the Atari 800 console. However, shortly after its launch, the gaming market shifted its interest from Atari to the Commodore 64 system.

By the end of the 1980s, EA invested an extra 50% of its product development expenses into retooling software products to run on different operating systems. At the time, the PC market was in the early stages of mass adoption, but EA saw a gap in the market.

This proved to be a profitable move for EA. The company started hiring project managers, which it called ‘producers,’ and software graphic arts designers, instead of programmers. EA began to take game ideas from freelancers, using a vetting process requiring independent scriptwriters to submit scripts to the management in a similar model to a Hollywood studio.

The company’s strategy was to produce as many titles as possible, using a shotgun approach to achieving success. In 1984, EA acquired the marketing rights to software developed by outsourced companies via its ‘Affiliated Labels’ program.

EA management started contracting sports celebrities, using them to endorse the company’s gaming titles. They would place images of the sports stars on the covers of their games and in the software itself, creating an amazing marketing ploy, and attracting a huge audience to EA games.

EA even went as far as to contract NASA’s Chuck Yaeger for the development of its flight simulator game. However, unlike other video game publishers, EA decided to publish its titles in-house, forgoing the traditional method of using third-party distributors.

With EA establishing an internal sales team, the company sold its titles directly to big retailers like Walmart, Target, and Toys ‘R’ Us. The in-house sales strategy proved to pay dividends for the EA management team, giving the company better control over its sales processes and improved tracking of consumer trends.

EA started its international sales campaign early in the company’s history. By 1985, $1.5 million of its $30 million annual revenue came from global markets. EA took to the European market in 1987, establishing a production facility in Langley, England.

Electronic Arts went public in 1989, listing on the Nasdaq stock exchange. The company’s market cap is $84 million, with sales in the first year of listing reaching $63.5 million and net income increasing from $1.3 million to $4 million.

EA started producing more games for the Nintendo Entertainment System in 1990. Shifting its focus to video game consoles over PC-based games. 1999 saw the company rebrand its logo, with the company7 beginning to focus on brand-related marketing structures around this time. As a result, it rebranded the core publishing side of the business to ‘EA Games.’

The company retained its ‘EA Sports’ brand for its top-selling sports titles, like John Madden Football. However, the company launched the new ‘EA Sports Big’ label for arcade-based sporting titles. The company would go on to use the full Electronic Arts branding for its co-published game titles.

Most of EA’s success comes from its multi-platform development strategy and from building strong franchises that stand the test of time in the gaming community.

EA struck gold with its consistency in publishing annual updates to its sports titles. FIFA, NHL, Madden, Tiger Woods, and NBA Live are a few examples of long-standing EA titles with yearly updates and a cult-like following of gamers supporting the annual releases.

To overcome the aspect of gamer fatigue concerning new annual updates to its games, EA announced it would start focusing on creating original intellectual property over new annual yearly updates to its catalog.

EA has a reputation as one of the best publishers in the gaming industry. However, the company is also one of the biggest developers in the space, with a huge roster of in-house talent.

2021 saw a massive uptick in the adoption of NFTs and blockchain tech. The company already does a huge amount of business with its ‘Ultimate Team modes,’ where online gamers can collect NFT cards. Users can add multiplayer shooters such as Titanfall, Battlefield, and Apex Legend and NFT-friendly game titles such as SimCity, The Sims, and Plants vs. Zombies.

However, in August 2021, at the height of the NFT mania, EA decided to announce its plans to jump into the Web 3.0 space with both feet. The company started hiring experts in blockchain development and NFT gaming in an attempt to push into the market.

EA and Its NFT Gaming Titles

With the world frothing for NFTs in late 2021, EA decided to publicly announce its move into the market. CEO Andrew Wilson hosted an earnings call with investors where he described the NFT market, Play-to-Earn gaming (P2E), and Web 3.0 as ‘the future of our industry.’

However, he added that it was too early to figure out a strategy to penetrate the market. While the company showed a lot of initial interest in entering the NFT gaming market, particularly the P2E sector of the online gaming economy, it’s yet to do anything to enter the space.

The CEO went on to say the following about NFT gaming and the industry at large during the earnings call.

“Anything that brings more people in and engages those people for more time is a good thing. I think that is the very foundation of our live services. I think the play-to-earn or the NFT conversation is still really, really early. And there’s a lot of conversation and hype about it. I do think it will be an important part of the future of our industry on a go-forward basis.”

The EA CEO implied the company would start its venture into the space with its ‘Ultimate Team component.’

“I think that in the context of the games we create and the live services we offer, collectible digital content will play a meaningful part in our future. So, it’s still too early to tell, but I think we’re in a really good position, and we should expect us to kind of think more innovatively and creatively about that on a go-forward basis.”

The news from the CEO sent the market into a frenzy, but it might have been too soon for the company to make such an announcement.

Too Soon? – The FIFA NFT Drama

The company reverses its decision from licensing hassles with its FIFA franchise. FIFA is one of its top-selling titles and an enormously popular game in international markets. EA is responsible for producing the ‘FIFA Football Series.’ These NFTs appear as card packs, allowing users to collect their favorite player in the Ultimate Team mode. CEO Andrew Wilson told investors the company plans to use the FIFA platform to move into the NFT market.

The decision to leave it behind comes from the inability to strike a licensing deal and the waning interest in the NFT and crypto economies as a whole. There are rumors that the company may introduce NFTs with the launch of FIFA 22, but there is no confirmed statement from EA management regarding this decision.

EA isn’t the only international gaming company interested in the future of NFTs, Web 3.0, and how these technologies will impact the gaming market. Leading publisher Ubisoft recently announced its intention to move into the NFT gaming space with its plan to develop P2E blockchain games during an earnings call with investors.

Looking at the other side of the spectrum, online gaming platform ‘Steam’ announced a ban on blockchain games. The ban included any apps built on blockchain technology issuing or allowing the exchange of NFTs or cryptocurrency on the platform.