Dislyte is one of the most fun RPG games we've ever seen. And, here's our tier list detailing the best characters to play in the game.

If you’ve heard of AFK Arena, then you’ve probably heard of Lilith Games, and they’ve recently come out with a new RPG called Dislyte earlier in 2022. The mobile game features complex underlying mechanics surrounding every hero in its roster, and to emerge victorious in different encounters; you will want to become familiar with their powers.

We have used the community’s ranking for every character in Dislyte as a reference to bring you a tier list highlighting some of the strongest and less-powerful heroes you will be using throughout your journey through the world of Dislyte. 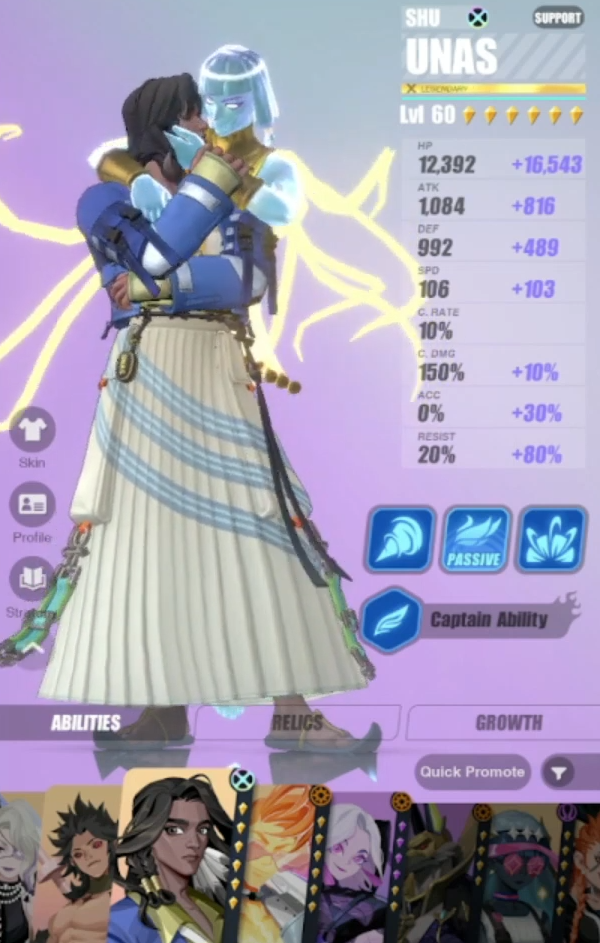 Ranking on top of this list, Unas is the best even in the S-Tier due to the high mobility, which sets her apart from every other Esper in the game (she’s the fastest). Her ability to grant immunity for one turn makes her extremely valuable, along with a high base SPD and team AP Up that will more often than not guarantee your allies the first turn. High damage, fast speed, and good utility make Unas a valuable ally in your team.

Clara’s support capabilities can be used to protect her teammates from debuffs (under the condition that your teammates have no debuffs, they will be granted immunity) while also empowering her base heals should things take a turn for the worse. Once you ascend, any excessive heal you provide to your allies will be converted into shields. She’s got an arsenal that makes her a formidable support.

Gaius’ versatility as a DPS makes him a must-have on your team. He can freely switch between his normal and God King mode with two different sets of abilities. While in his normal mode, he will have an ACC bonus while also being able to inflict Sear on damage dealt. Upon ascension, you’ll be able to inflict Buff Blocker as well.

Through his God King mode, Gaius can deal bonus damage with his Thunderstrike ability, now dealing AOE damage compared to being solely single-target in his normal mode.

Sander’s burst-damage capability and SPD boost provide him with high damage. He also works as a Disabler, so while he does damage, he’s also bringing down the enemy’s AP, SPD and stunning them altogether. His playtime on the battlefield will gradually increase his SPD.  Keep in mind that Sander’s ATK and SPD directly affect his overall damage dealt, so if you play around with those two variables, Sander can become OP after a few turns.

Gabrielle has a relatively diverse set of moves as a Support Esper in which she can add to your allies’ DEF while also providing them with immunity. Enemies will receive penalties on their DEF and ATK. Your team won’t have to worry about debuffs with Gabrielle, as she can easily clear all negative effects and give the other Controllers a run for their money. Due to Gabrielle’s overall arsenal, she is helpful in all modes, and you can bring her to any situation, eyes closed.

Dhalia is yet another Support character making it to this list as she boosts her team’s offensive, providing a 25% boost to AP, increase in C. RATE and ATK. Her Freeze and Stun can prevent enemy Espers from doing significant harm to your allies.

Lo and behold, the woman blessed with Heimdall’s powers. While primarily being a DPS character, Ashley does have the tendency to support her allies by providing them with a boost to their ATK. Moreover, her attacks will bring the enemy’s SPD and ATK down, and ascension will begin to stun-lock enemies (only the ones whose ATK is lower than Ashley’s).

Did you know? Chloe made it to the A tier because one of our writers had a crush on her. No, we’re just kidding; she actually has one of the stronger abilities as a DPS that give her a unique playstyle. She can steal buffs from enemies and inflict enemies with a buff blocker. The more buffs you can get on Chloe, the better. So, if you’ve got allies that can provide her with a few buffs, then make sure to pair her up with them!

Say hello to Lin Xiao, who can pretty much handle herself in all content within Dislyte. What’s the best thing about her? The Tiger Roar buff will amplify her damage potential by increasing her C. Rate to a whopping 100% for the next 3 turns. During this, she cannot be Buff Blocked nor can she be dispelled. To top it all off, she can penalize enemies’ AP, SPD, and inflict Bleed and Diseased buffs on them.

Being a healing Esper, Asenath finds herself in the B-Tier thanks to her buffs provided by Recovery and Lotus Mark. You can make your team a bit tankier while simultaneously increasing Asenath’s AP to ensure she can heal frequently. If you can time your plays right, you can easily negate enemy damage to some extent to give your allies a chance to live another day.

Li Ling is a DPS specializing in leeching enemies’ health through his attacks. Moreover, if the targeted enemy has a high health pool, Li Ling’s AP Down is amplified accordingly, along with the damage dealt as well. All of his abilities make him especially useful in Point War.

Ollie’s a fighter that works as both a Support and DPS, which adds to the usefulness of his toolkit. You can protect a teammate from death while fending off the enemies with DEF Down, Silence, and Taunt. Works especially well in PvP game modes.

Dislyte boasts a huge roster of heroes that are blessed with the powers of Gods. Not all of them may be especially effective, but you won’t have access to some of the best ones until later in the game. So, while you wait around to finally get to the S-Tier, you might want to make your goal to acquire the B-Tier heroes first to strengthen your overall team composition.