What is Meda Wars? Turn-Based Strategy Game for Mobile Devices

Meda Wars is a turn-based grand strategy game for mobile devices. Players conquer territories to obtain resources and rewards while Cryptomeda heroes accompany them into battle, with no necessity to use Metamask in game.

Meda Wars is a turn-based grand strategy game for mobile devices. Players conquer territories to obtain resources and rewards while Cryptomeda heroes accompany them into battle, with no necessity to use Metamask in game.

The world of Meda wars is divided into two factions- Goliath & Renegade.

A player can select any faction that suits his gameplay. After choosing the faction, one is ready to explore the world map of these two factions. There are two modes of Meda Wars to explore further – Conquer mode and Empire mode.

There will be multiple missions per day in the game. The rewards get higher based on the difficulty level of the mission. Mission with higher risk gives higher rewards. But if a player wants to play safe, he can choose accordingly. Missions are categorized as easy, medium, and hard.

Meda Wars has a PvP and PvE based combat gameplay. In this, a player can conquer territories, join monthly faction battles and climb up in the leaderboard table with the best players.

The Neutral Swarm faction will control many gray territories. Each faction will be rushing the closest Neutral Territory. There will be a description of Neutral Creeps points and Faction Points. If you get a certain amount of points, your faction will win the Territory.

The player has to either defend his Territory or attack enemy territory. Once the enemy territory is conquered, he has to defend it for a certain amount of time. If successfully defended, he will get bonuses and lockdown for a certain amount of time before the Territory can be attacked again. If he fails, the enemy will take it back, and now they will need to defend it against the player.

The further you are from your town and close to the middle, the more dangerous Swarm enemies and difficulty you will face for obtaining it, but of course, you will earn more Rewards.

This mode will accompany the multiplayer combat mode of Meda Wars with a level of gameplay involving the ability to mine resources, build and upgrade structures. In this mode, significant efforts will be put into play before going head to head on the battlefield. Players can build, expand and upgrade their base while also gathering resources and crafting weapons to give them an edge in battles.

In the combat system, your character will face off with multiple enemies. Characters will take turns based on the initiative stat and will use abilities to spend action points.

Abilities – Each player will have three sets of abilities.

Weapons – There are two types of weapons with each player viz. Melee and Ranged. Melee can damage only within the melee range, i.e., 5 yards or closer. The ranged weapons can damage all enemies but less damage compared to the melee row. Weapons are switchable with a button. You can combine melee and ranged capabilities.

Enemies – They will vary between tanks, warriors, rangers, rogues, mages, supports, healers, mini-bosses, and bosses archetypes. There will be various symbols above the enemy portrait for you to figure out what ability will be used.

While exploring the map, you will come across the parts of the map; these specific areas are called NFT land. These lands are available for sale; players purchase them. NFT lands with specific climates are called mines. If you own an NFT Character, you can send him to your mine to collect more resources. Breakdown of NFT land:

NFT cards can be obtained from staking, and they have a solid impact on the Meda Wars gameplay. Each NFT card provides passive income and bonuses to your character’s gameplay. 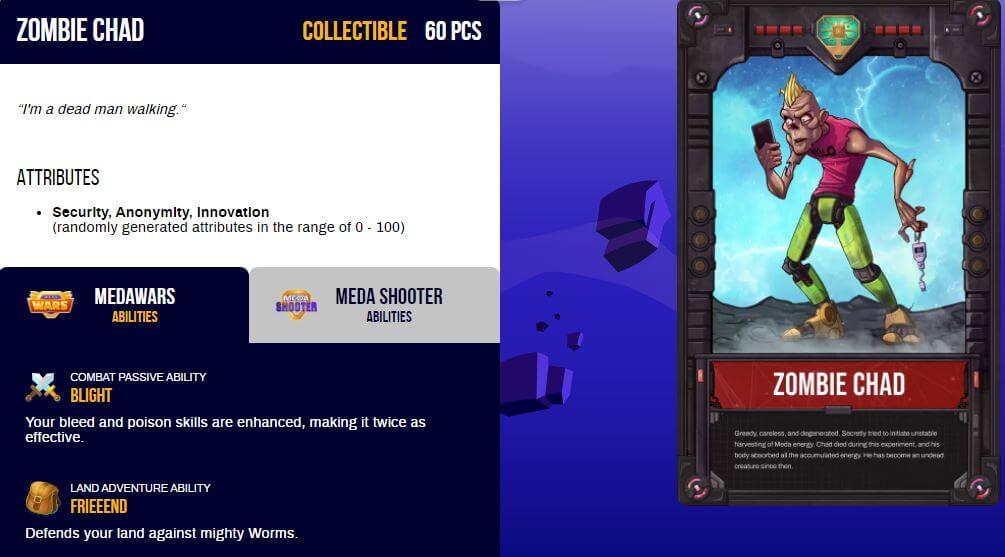 There is one active perk and a passive perk per card. In-game, you will be able only to have one card that acts as a primary.

$TECH is the native currency of the Cryptomeda platform and is based on the ERC20 token protocol. ERC20 defines a common set of rules for all Ethereum to follow, including the approval of transactions, users’ data access limits, and total token supply. Developing with ERC-20 makes it highly diverse and easy to shift inter-domain.

$TECH is used to make purchases to trade for the collectibles within the marketplace. The sale, purchase, and storage of these NFT tokens are supported through the user’s Metamask wallet.

With both cryptocurrency and gaming becoming increasingly interlinked, it is believed that mass adoption of the emerging play-to-earn concept will follow as it allows players to earn real money while playing games.

Cryptomeda is a gaming ecosystem that blends one-of-a-kind NFT collectibles, DeFi mechanics, and crypto characters into an exciting sci-fi world. Players of all experience levels can explore Cryptomeda and find various earning opportunities.

All economic activity is facilitated by one unified currency – TECH tokens, which would enable trade and commerce within the platform to tie the world together.

What is Nitro League? A World of Racing

What is MOMOverse? A World of Endless Possibilities

What is Earncraft? Minecraft’s Play-to-Earn Server

What is Champions: Ascension? Next Generation AAA Blockchain Game with NFTs