What is Memeland? 9999 NFTs By 9Gag to Create The Memeverse

Memeland is a collection of 9,999 NFTs by 9Gag that is backed by big names in the industry. See for yourself what it's all about!

In the early 21st century, internet memes took off, as people gave them quirky and funny twists as they became viral on the internet. Memes quickly go viral because people can share them through the internet via e-mail and direct messages. And later, on social media platforms.

Memes are popular because they are images and borrowed context from a popular movie, news, photos, or events that are then copied by everyone, adding their own alterations and clever puns to it. Not long after, 9Gag was created and became the mainstream media for spreading memes and a go-to website for everyone who wants to get a good laugh.

And here we are, 14 years later. 9Ggag memes move towards the world of blockchain and NFTs as though keeping up with the trend. The giant social media meme platform with over 200 million audiences across its website, apps, Facebook, Twitter, Instagram, and even TikTok, has introduced Memeland, their very own NFT project on the Ethereum blockchain.

Memeland is a collection of 9,999 NFTs by 9Gag. These NFT collections come with a multitude of perks and benefits. And owning one grants the owner a private club membership,  exclusive access to the creator NFT marketplace, access to IRL (in-real-life) events, upcoming NFT drops, and so much more.

There are 9,999 Captains, together with their pirate crews, who shall voyage the vastness of the ocean known as the ‘Broken Sea.’ And all of them have one goal, and one goal only. And that’s to find the legendary island that holds unimaginable treasures known as “Memeland.” Collect these NFTs and become a part of this fascinating community.

Memeland has a solid bunch of investors and advisors supporting them behind the scenes. The likes of Gary Vaynerchuk, a Belarusian-American author, speaker, influencer, and entrepreneur. And he also co-founded the restaurant reservation software company Resy and Empathy Wines.

They also have Timothy Ferriss behind Memeland’s back, an American entrepreneur, lifestyle guru, investor, author, podcaster, you name it. A few of his famous works were self-help books that he published, including the 4-Hour Work Week, the 4-Hour Body, and the 4-Hour Chef.

And Kevin Rose, an American entrepreneur co-founding Revision3, Milk, Digg, and Pownce. He was also a production assistant and co-host at TechTV’s The Screen Savers.

And these are just a few of the well-known individuals invested in Memeland. They are also backed by a few renowned capital venture firms like First Round Capital, Greycroft Partners, Freestyle Capital, 500 Startups, True Venture, and other firms that provide seed-stage funding to startup technology companies.

The team behind the project seems to portray a pirate theme for Memeland. And funny enough, they quoted that there is no such thing as a “road” at sea, hence no roadmap. But there is a North Star they follow towards the mission they want to accomplish.

So instead of following a step-by-step process for a roadmap, they have a general mission to conclude. And that mission is to bridge and connect both creators and consumers from web2 and web3 communities and make everything a tad bit more fun. 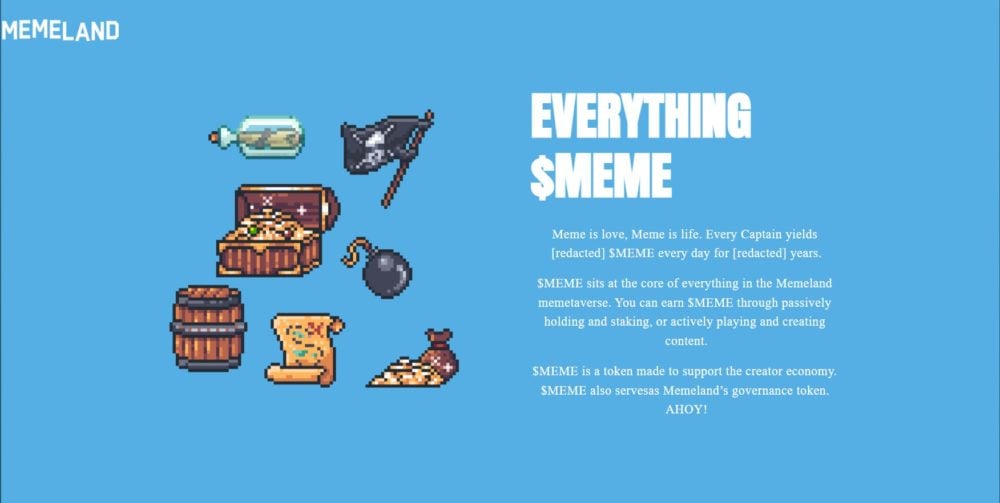 The MEME token is at the center of Memeland, serving as the governance token. $MEME also serves as the game currency used for in-game purchases, and players can earn passive income by holding and staking it. Moreover, players can also earn MEME tokens by playing and participating in in-game events. And if they’re feeling creative, players can also create their own content and monetize it to the public.

Memeland just recently made presell of their first batch of NFTs at 4 am EST on May 18, 2022. A total supply of 500 was released and sold for 0.20 ETH per mint. And even though they’ve set a limit of only 10 NFT mints per wallet, they quickly sold all 500 supplies.

And speaking of limited mints, Memeland has already scheduled the next batch of NFTs that they’ll release on June 30, 2022, at 12:00 am Universal Time Coordinated (UTC). The price and limit for NFTs to be minted are still yet to be determined.

And since Memeland is still in its infancy and development stage, these numbers could shift and change in the near future, depending on how they see things fit. So keep that in mind.

We all love memes, and I’m sure you had a good laugh at one if you’re active on social media. I believe that this is a clever move by 9Gag because meme creators can finally take the credit by having actual ownership of their memes and even make a profit!

Not all memes are good, but we’ve seen popular memes that keep finding their way to resurface no matter how old it is. Therefore, a few good ones will undoubtedly sell for a good profit.

Memeland still has a long way to go, but they’ve already established a good number of over 300 thousand followers on Twitter. And it goes to show that there is a healthy and active community supporting and invested in them. And it’s all thanks to their excellent track record of over 14 years of serving millions of audiences with good memes.

Disclaimer: I’d like to let you know that we are not sponsored or affiliated in any way with Memeland or any other entity mentioned in this article. Our goal is to provide useful and educational information for our audience. And since you took your time to read all of this, we hope you learned something valuable in return.

There’s more to come from us, invaluable information and insights that you won’t find elsewhere. So consider subscribing if you want the latest scoops about blockchain games, NFTs, cryptos, and everything related.

How to Mint an NFT on OpenSea: Step by Step Beginner’s Guide