Monster Racing League is a blockchain racing game that allows players to earn rewards by performing well in races and own monsters, vehicles or tracks as NFTs.

Monster Racing League is a new play-to-earn blockchain racing game developed by New Zealand based Flightless Studio. The game involves monster like characters that drive themselves through a racing track.

Players have to use unique skills and abilities to destroy their opponents or boost past them. The game heavily focuses on the fun factor rather than earning profits unlike other blockchain games.

The multiplayer strategy game allows players to participate in races, win rewards, use in-game items like shields, smoke, boost cards to defeat opponents and even bread monsters with different skills and traits.

What is Monster Racing League?

The Monster Racing League is a blockchain racing game that allows players to earn rewards by performing well in races and own monsters, vehicles or tracks at the same time.

In the game players need to build a team of monsters and race them to unlock special abilities, character upgrades, new vehicles and much more.

You can also breed monsters together to create the ultimate powerful monster that will have combined performance traits of its parents.

The monsters are basically tradable NFTs and each one is unique in terms of stats and looks. The play-to-earn mode of the game involves a ranked tournament in which top 3 players are rewarded while remaining players receive comparatively smaller rewards for participating.

The primary focus of the developers is to make the game more enjoyable unlike blockchain games that focus more on earning money. Gameplay comes first, then comes blockchain!

A player’s skills and strategy is what matters in winning a race in Monster Racing League. If you are good at playing you will definitely win rewards.

The game offers large numbers of monster NFTs, vehicles and tracks so the winning factor depends on how a player strategize. There are multiple ways to win the game like completing in special events and tournaments, breeding/selling monsters, performing well in races or collecting royalties for owing a track.

The game runs on polygon network due to its fast and low-cost infrastructure. It has a dual token economy consisting of two ERC-20 tokens Knucklebones Token (KBT) and Phat Loot Token (PLT) which are the utility token and Governance token of Monster Racing League respectively.

Before you start playing Monster Racing League, you need to buy or rent a monster from a marketplace. Monsters have unique strengths and abilities so choose players only need to focus on how to get past the opponents either by using boost cards or using weapons one wisely by assessing its traits.

You must also equip your abilities and weapons that will be useful to boost past opponents or destroy them. After the matchmaking process you join the lobby with monsters having similar rankings that will be competing with you. 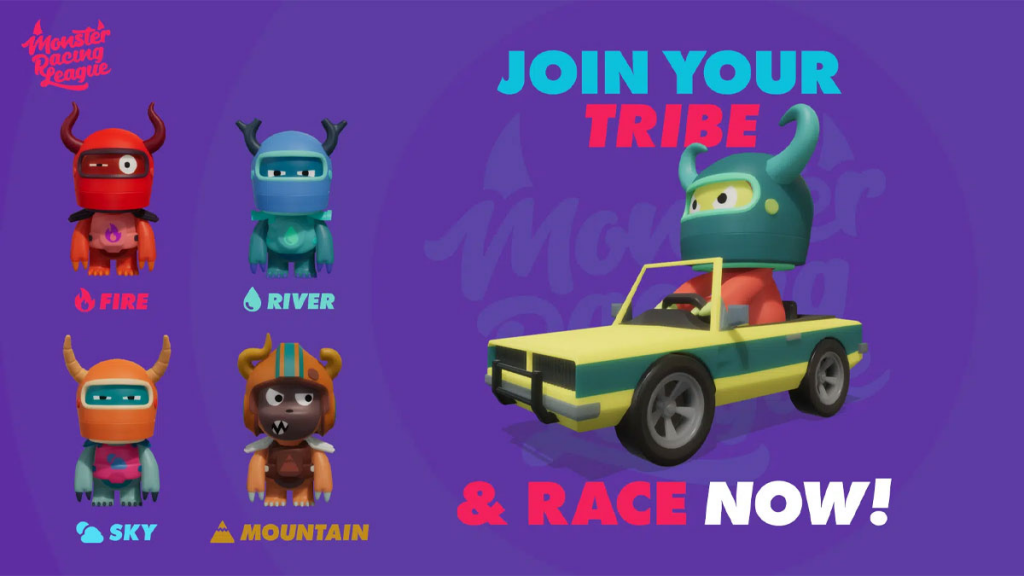 During the race monsters will do the driving themselves but to destroy opponent vehicles. Here your defensive and strategic skills will come in use. The higher you rank more will be the chances of winning exciting rewards.

Each standard PvP race in Monster racing League consists of multi round tournaments having six players. At the start of each round players can choose the weapons and abilities. To join a standard race, players need not pay any fee, however special tournaments with higher prize pools will be paid. On winning a game, top 3 players will receive rewards in the form of KBT tokens, boost cards and other in-game items.

Monster: Monsters are character NFTs that drive your car in Monster Racing League. No two monster have same abilities and stats. The monsters belong to a specific tribe and have access to special abilities depending on which tribe they belong to. The Monster NFTs are tradable on external marketplace and can be bred together to generate a new monster.

Tribes: There are 4 tribes in MRL and each tribe has specific abilities that are inherited by the monsters.

The four tribes are Fire, Mountain, River and Sky. 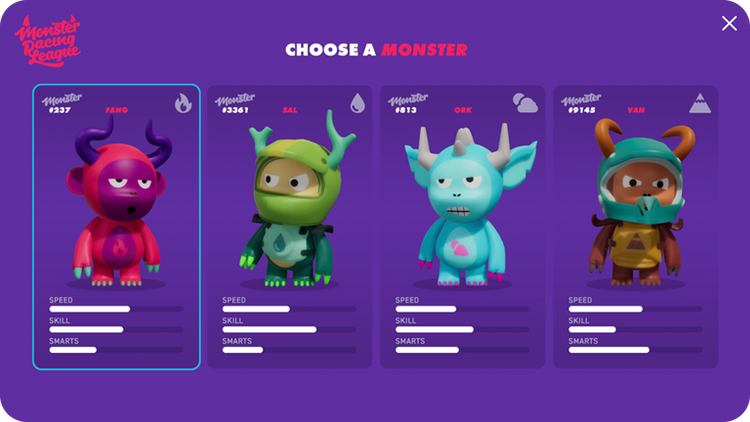 Boosters: Boosters can be used to increase speed, handling and power up abilities. They give you the opportunity to race past other drivers and help you in winning the game. You can buy booster pack NFTs on the game marketplace and maximum of 3 boosters can be used in a race.

Tracks: Tracks are in-game items and NFT assets that can be used to earn rent for owning the track. Players can make passive income by renting out a track. Tracks are rare assets and 20 tracks will be given out during the initial mint of each container. The tracks will be set in different locations including forests, airports, islands and will act as obstacles during snow, rain, fog etc.

Flightless was founded in 2005 as a digital design company that slowly transitioned into full-time gaming studio with own IP rights. Flightless has a team of experienced developers, designers and creative directors and is known for its RTS game Element and the Apple Arcade title Doomsday Vault. The team consists of Founder and Creative Director John O’Reilly, Greg Harding-founder and technical director, Grant Robinson- Game Designer and many other people.

Phat Loot Studios on the other hand is experienced in marketing, economics and game design and will handle Monster Racing League’s marketing and promotions. The Phat Loot team includes Kerwin O’Malley-Marketing & Growth Lead, Keegan Lloyd, Joshua Grant and others.

MLR has a dual token model that runs on polygon network. The in-game utility token is Knucklebones Token (KBT) and the governance token is Phat Loot token or PLT.

The KBT is the primary token used for buying in-game items like booster packs NFTs, breeding or selling Monster NFTs and receiving rewards from renting out tracks or staking tokens. The ERC-20 token runs on Polygon Matic Chain there is no capping of its supply. The top 3 winners of each race will receive KBT tokens as rewards.

The PLT token on the other hand is used in all Phat Loot games and ecosystem. Players can earn Phat Loot token  by participating in special events, races, winning tournaments, engaging in marketing events. It can be used for breeding monsters in Monster Racing League and to buy tickets to exclusive events.

The container mint took place on 24th June which is the first wave of minting for the brand new game. The Monster containers contained 6 NFTs with a rare track that lucky players received. 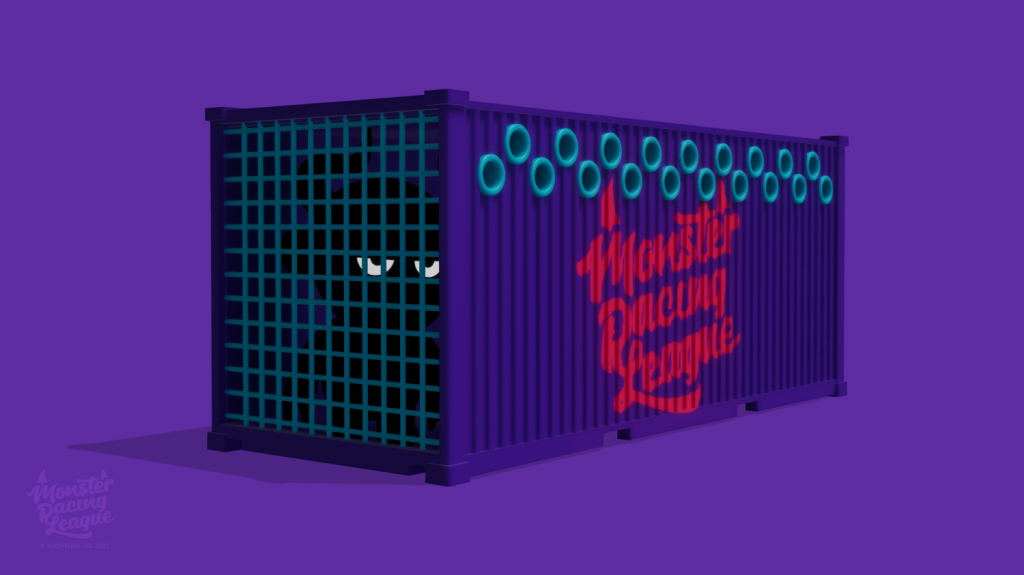 About 2500 containers of Eth and 2500 of Polygon was given out in the pre-sale round. The total amount of the sale was $200 USDC. The containers had everything you need to start playing the game from Monsters, Abilities, Boost packs, Vehicles to Tracks.

What is Galaktika? A Future Civilization Based NFT Game